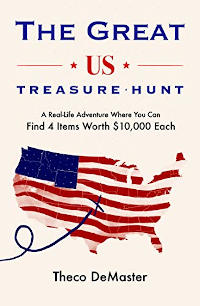 The Great US Treasure Hunt
Solved

A nation-wide hunt with treasure that could be sitting under a tree in your favorite park.

"The Great U.S. Treasure Hunt" has concluded with all four treasure being found but the eBook is still available on Amazon if you are interested in the puzzles. Each chapter can be decoded to spell out an exact location of a unique proxy item worth $10,000. When you go to that location and retrieve the item, you win $10,000.

Unlike the Forrest Fenn or "The Secret" treasure hunts, The Great U.S. Treasure Hunt will not last for 10 years or more, and when someone wins, a $10,000 check will be delivered to the finder! The creator also plans to reveal exactly where the item was hidden, and how the messages in the book were decoded that led to the find. After just 30 days, extra clues will be provided via social media to make sure their treasure is discovered.

The items will be in public, not buried, within an easy walk of free parking, and not within 50 feet of any body of water; so no shovels, no metal detectors, no entry or parking fees, no swimming, boating, climbing, or hiking is necessary. 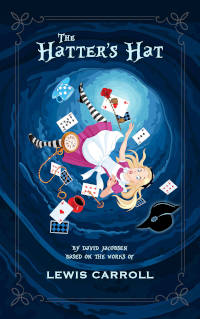 Chapter 3 was solved on Feb. 14th! Chapter 3 was solved by taking the first letter from words ending in -ING and -LY. Then by alternating between the two starting with an -ING word the message TINKERBELLS GRIFFIN AT FRANKLIN FOUNTAIN is produced. This lead the finder to the Tinkerbell playground in Pinkerton Park in Franklin, Tennesse. A griffin token was found attached to a drinking fountain with red tape. The finder has posted a video on Facebook here with more details about how she came up with the solution.

Chapter 1 was solved on Feb. 6th! Chapter 1 was solved by taking the first letter of repeated words in a sentence to produce the phrase TRISLIDE NAMPA LIONS HERMES BADGE. This led the finder to Lions Park in Nampa, Idaho where they found a Hermes badge. We are still waiting to hear more from the finder about how this chapter was solved.

Chapter 2 was solved on Jan. 20th! Chapter 2 was solved by identifying the letters after a comma in the chapter, in order. This provides the message TINY WINGS SANBORN BENCH RAILYARD PK SF NM, and led the finders to a specific bench in the Railyard Park in Santa Fe, New Mexico. A video of the find and additional details about the find have been provided by The Great US Treasure Hunt.

Chapter 4 was solved on Dec. 20th! Chapter 4 was solved by identifying all the One Hit Wonder song names and artists mentioned in the chapter, in order. Then alternating the first letter of the song name and artist, the code spelled out NORTH VEGAS ELDORADO BENCH SILVER Z. A quick google search will take you to a park in North Vegas where the proxy item was found stuck underneath one of the park picnic table benches. A video from the treasure hunt creator has been posted that further explaining the solution here.